Remember the really clever kids at your school – the ones who always got top marks in tests without really working hard ? What are they doing now?

Some have gone on to great things, but it seems to me that many have underachieved in life. If anyone can provide any research evidence I would be massively grateful.

Does this profile seem familiar to you:

These are the students that to me are often overlooked as they are victims of their own success. They are failed by the standardised test system that only measures performance. These students are masters of decoding exam papers, often with little or no understanding they use a system of learned processes to answer questions often without any deep thought needed to do so.

These students can be fabulously qualified, but poorly educated. They are good for carrying out procedures that they have been taught to do when told to do it. As they have strong knowledge base and high levels of qualifications they have always been employable. This however may change in a world that values more what you can do than what you know.

These students often lack autonomy and creativity. They have never needed to build resilience as they have very rarely failed. When they do fail they are stuck without strategies. Their sense of success has been based on their perception of their cleverness that has been constantly verified by the system, rather than by how hard they have worked to earn that success.  When they do hit a hurdle they see this as a failure in their intellect rather than something they can take control of. Failure is not seen as a learning experience, but something to be avoided at all costs and they are often very risk averse.

We send these children into the world as very academically successful , but very dependent adults incapable of doing much on their own.

What can we do with these students?

One of the main issues is persuading them that they need to change. They are successes on every measure that we use to assess them with. If we have an obligation to really equip them for the future and teach the student, not just the material then we have to try.

One of the problems is that these students often have deeply entrenched habits that focus on performance supported by parents and schools. Their sense of self depends on being seen to be clever and the current system allows them to sustain this. Efforts to get them to push their boundaries are unlikely to be welcome.

David Didau @learningspy wrote a great blog about that here

There’s some brilliant stuff on this in The Spirit Level: Why Equality is Better for Everyone , which explains the notion of ‘social evaluative threat’. This is based on the view that humans are ‘highly vigilant to threats to (our) social esteem’, and that shame is an overpowering emotion. The research shows that, basically, if you really want to make people stressed, anxious and unable to learn, then put them in a situation where they are publicly judged and compared alongside others when undertaking something that it is not in their power to directly influence. Give them something they can’t do, then share their performance alongside that of their peers.

We as teachers need to model what we want to see. How can we expect students to deal with potential failure if we ourselves never push ourselves out of our own comfort zones.

I took a group of students on an extreme sports residential and talked them through their terror in some cases to climb or abseil  “Bravery is not the absence of fear,it is feeling the fear and doing int anyway” they all went through their boundaries and really learned something. Later we went coasteering and came to a point to jump in off the rocks, one of my few fears is jumping into water when I cant see what is in it. I did the first few jumps then stayed in the water when there was the option to do a bigger one. One student Darren, said to me that he was scared but if he did it then I would have to do it, so I agreed. He went up the rock and stood at the top, then bottled it. I felt a huge sense of relief until he shouted “ If you do it first then I will do it!”  damn you Darren! but I also realised I had been very good at taking kids out of their comfort zones whilst staying within mine. I was truly terrified and didn’t hide it, despite almost every part of my being saying not to do it, I stepped off (It was truly horrible, but I felt like less of a fraud)

I am a product of failure, in teaching I have failed so many times  – That didn’t work, no one died, lets move on. In mountain biking, snowboarding and surfing I know where my limits are as the feedback is instant and painful. In order to learn from failure though you need to understand what went wrong and what to do and that is where the teacher that you trust comes in. In playing video games players fail over and over again, yet are not disheartened . Can we learn from this Gamer Therapist thinks we can with this interesting blog here

In it he looks at how we should be more open about our failings here Where I have failed as a teacher . Twitter and blogs are great for showing how wonderful we are, but the best staffrooms are the ones where we can admit our failings without getting the response “Really, they are fine with me!”

The problem is as teachers the stakes can also be very high with a single ‘bad’ observation carrying huge ramifications. We need a supportive management to allow us to take risks.

In case you are falling asleep at this point, here is something to wake you up

We ideally want our students to be in a state of ‘Flow’ proposed by the wonderfully named Mihaly Csikszentmihalyi . The state of flow is characterised by a complete absorption in the task at hand, often losing track of time and other stimuli.

Flow can only be attained when their is a match between the challenge and the skillset of the students. One of the problems is that students often perceive their skillset to be lower than their true capabilities. In a lot of schools these bright students are often in a state of boredom or relaxation. Simply increasing the task complexity however is more likely to lead to anxiety that is the killer of learning as well as performance and the subsequent letters from parents.

Training has to be slow, increase the challenge in small steps with scaffolding for those who need it. Some of our brightest students however reject any support and end up in a state of failure avoidance. Failure avoiders are characterised by blaming external factors (the teacher usually) or circumstances and taking no personal responsibility for a diminishment of performance.

The work of Carol Dweck on fixed and growth mindsets would be worth discussing with your students. Those high achievers may have never felt the need for a growth mindset as they are perfectly matched to a performance orientated system where they know the rules and can give the teacher what is required as long as the task is explained clearly to them.

There is a summary here 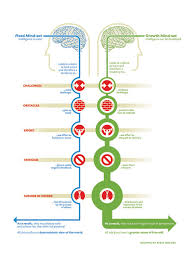 Very high achievers often show very little resilience as they are not used to failure and have no strategies to deal with it. So what do we mean by grit?

Often these high achievers can have a poor self image, which is why they may struggle with risk. Look for their body language and see whether this helps

Amy Cuddy: Your body language shapes who you are

The three act idea from the great Dan Meyer that I have outlined here and the science ideas here are a great way of getting students to set their own targets and learning to move forward in a low risk, but high potential environment.

5 thoughts on “Are we teaching our most successful students for a lifetime of avoiding failure?”

Online learning problems!!! My mic goes off and my students start telling me they can hear kids talking- My daughter upstairs had switched on some Bluetooth headphones and my Mac had automatically connected to them bypassing me!

I think the easiest way to make a rubric is by creating a google sheet of the criteria.

I used a template from here https://alicekeeler.com/2020/07/31/add-a-rubric-to-google-classroom-with-google-sheets/
however I edited it to give me more flexibility in what I wanted.

See a ‘copy of one of my examples here: https://docs.google.com/spreadsheets/d/1f3hAVhS0ZcjwpyeamI1wwxT2a2YVMuuejy_pjrUh2Yg/copy?usp=sharing

Will be using @padlet and @quizlet in the online webinar around 11:10. https://bigmarkers.page.link/aAB1

Less than half an hour until we kick things off for some great Saturday science chat! #TMSci https://bigmarkers.page.link/aAB1

MOE lester Mike Coxlong Ben Dover - - all names my online students have tried to use. Any others so we can have a list to stop us being caught out?