Basic Principles of the 3 Acts are shown here

You may want to start with the shortest question you can. In this case;

Should demolition balls be bouncy or not?

How do ‘dead blow’ hammers work ? 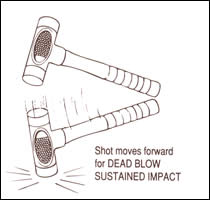 Stilleto Tools suggest that their titanium hammers have a 97% efficiency compared to 70% for a steel hammer. Could this be true and how would you test it?

What questions does this make you think of?

Which one would be the most effective at knocking the glass over?

Which is the most efficient at transferring energy?

What could happen if ….? (what matters?)

The plasticine ball is likely to stop on impact and so there will be a large change in the kinetic energy of the ball, but how efficient is this transfer? There will be less change in the momentum than for the bouncy ball as there is no rebound.

So what will happen?

The bouncy ball is clearly more effective at knocking the glass over.

There are many other aspects that could be investigated

The efficiency of hammers

Why ‘dead blow’ hammers do less damage to soft surfaces

Will be using @padlet and @quizlet in the online webinar around 11:10. https://bigmarkers.page.link/aAB1

Less than half an hour until we kick things off for some great Saturday science chat! #TMSci https://bigmarkers.page.link/aAB1

MOE lester Mike Coxlong Ben Dover - - all names my online students have tried to use. Any others so we can have a list to stop us being caught out?

The next teachmeet icons extravaganza is Science and it's this Saturday! join us for discussions about teaching climate change, strategies for remote learning and more - Key speakers include @natalieben @doug_parr and @jwalms93 https://www.bigmarker.com/teachmeeticons/Teachmeet-Science-Icons

Shout out to the brilliant @Phetsims for online learning I absolutely love you!

@FairweatherD @natkin Yes, we have begun a testing cycle for this release (but being a complex simulation, it will be a bit of time before publication)